Coach Smith is entering his second year as the Head Football Coach of the West Texas Warbirds. Coach Smith is coming off an undefeated season and leading the Warbirds to its first League Championship in the inaugural season for the Organization. The Warbirds lead the Lone Star Series in Passing Offense and finished first in points per game. The Warbirds also lead the league in takeaways and the fewest points allowed by a Defense in 2021.

Smith is a native of Odessa, Texas; Tate Smith played Quarterback and completed his degree at the University of Texas at El Paso. As a previous member of the Odessa Roughneck Coaching staff Smith helped build the roughnecks into a playoff-caliber team in 2012. He would return to the West Texas Wildcatters Coaching Staff in 2014 as the Offensive Coordinator.

Prior to becoming the Head Coach of the West Texas Warbirds, Smith was the Assistant Head Coach and Offensive Coordinator of the Rio Grande Valley Sol, formally of the X-League, in 2015. Smith helped lead the Sol to a regular-season championship and an appearance in the X-League Championship game in 2015. The RGV Sol led the X-League in passing offense and finished first in points per game during the 2015 regular season. 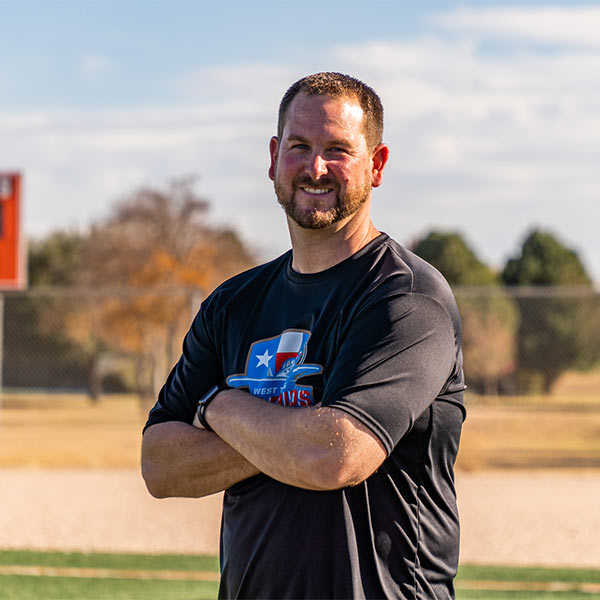 Coach Garza is entering his second season for the Warbirds as the Assistant Head Football Coach and Offensive Coordinator. Garza coach one of the most electrifying wide receiving core combinations in all of indoor football in the 2021 season. Coach Garza had four different receivers catch 10 or more touchdown passes in last year's Championship Season.
Coach Garza has been a member of the Texas High School Coaches Association for the last 33 years with stops at:

Coach Dean M. Garza has been married to Eva for 31 years. 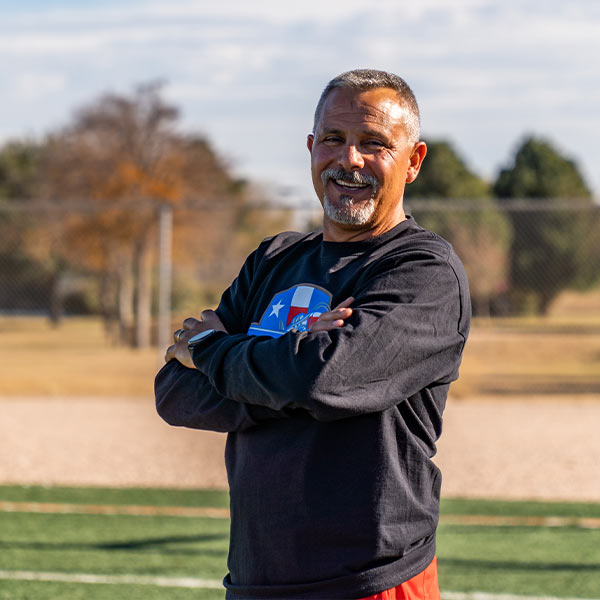 Sam Singleton is entering his 1st season as the Defensive Backs Coach for the Warbirds, with experience in AF2 and IFl, as a player, Singleton has Coaching experience at the Pro Arena, High School, and Semi-Pro Level. Collegiately, Coach Singleton was a two-sport athlete at the University of Texas at El Paso where he helped the Miners win the 2000 Western Athletic Championship. Currently, Coach Singleton is the Head Football coach at Texas Leadership Charter Academy in Midland, Texas. 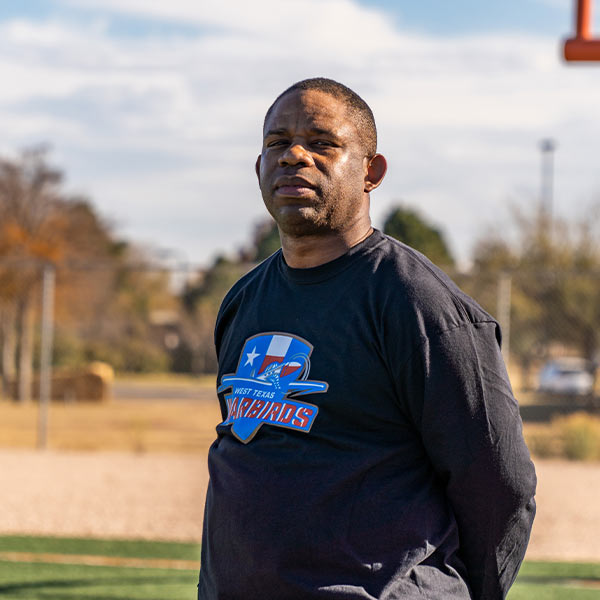 Coach Blakely is beginning his 2nd season as the Defensive Coordinator for the Warbirds. Blakely brings many successful years of coaching, playing, and passion for the game. Blakely comes with 10 years of knowledge and 11 years of field experience, in this very intense fast pace game of football. This is what he believes will make the team and organization very entertaining and enjoyable for many years to come. Coach Blakely help lead the West Texas Warbirds to their first Championship in 2021 and he also has two personal Championship’s while playing with the Lakeland Thunderbolts in Florida and The West Texas Roughnecks.

Coach Blakely began his coaching career 7 years ago and has coached in the NAL, IFL, IAFL, and AAL. He is honored to be a part of such a powerhouse coaching staff and cant wait to build on last year's successful season. He is ready to help Coach Smith and the rest of the coaching staff to another exciting year of Warbird Football.

Coach Blakely and his wife of ten years Canddice have two children Caydin 16 and Keagen 14. He is very thankful for his biggest support system his family, friends, and the Warbird Nation. 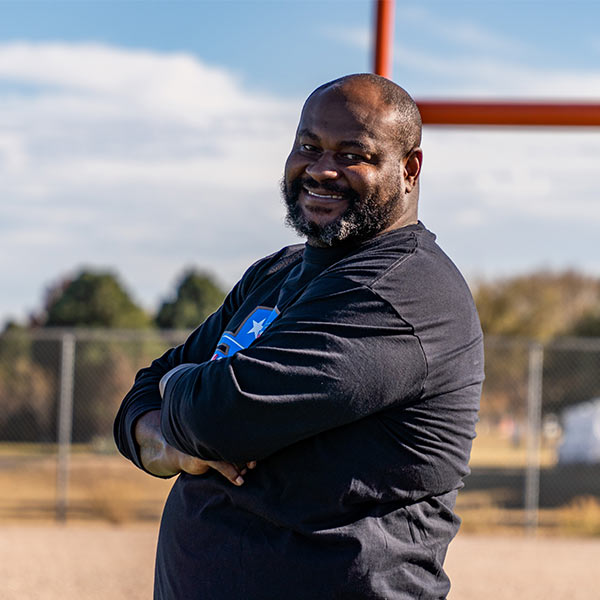 Coach Robinson is entering his second season as Special Teams Coordinator with the Warbirds. In addition to handling the special teams, Robinson also serves as assistant defensive backs coach.

This is Coach Robinson’s 5th season coaching football. After playing 4 years of arena football with the Odessa Roughnecks and San Angelo Stampede. Robinson began his coaching career in 2017 as the Special Teams Coordinator and Wide Receivers coach for the West Texas Drillers. Then in 2019 moved to West Texas Pride as the Running Back coach.

Coach Robinson is a native to Odessa, Texas where he graduated from Permian High School earning all-state honors as a placekicker. Robinson then went to Midwestern State University. 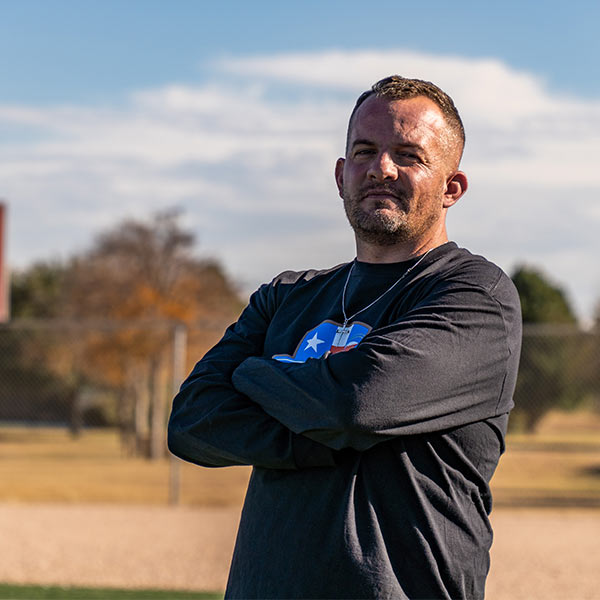 After a five-year hiatus from coaching, Jim Conger will be entering his first season as the Offensive line coach for the Warbirds. Conger has taught and coached for a combined total of 32 years, serving at schools such as Floydada, West Texas State University, Texarkana’s Liberty-Eylau, Hereford, and his last stop before retirement, Midland High.

Conger was able to enjoy many highs in his career including coaching in two state championship games while at Hereford and Midland High schools.

Conger obtained his Bachelor of Science degree from Eastern New Mexico University where he played for the Greyhounds from 1981-84.

Conger and his wife, Cristi reside in Midland and have 2 daughters and 3 grandchildren. Conger has been a Special Education teacher in Midland for the past 4 years. 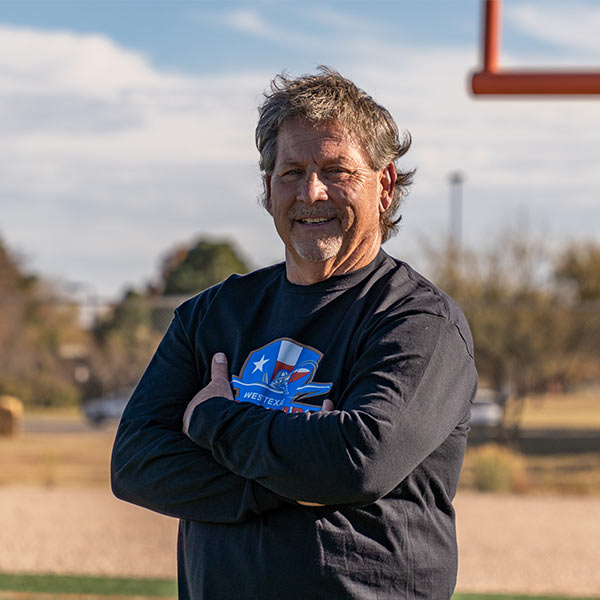 Coach Scott is entering his first year as the running back coach for the Warbirds. Scott is a graduate of Midland High School. After graduating high school Scott would earn a scholarship at Angelo State University.

Coach Scott has played and coached for several Semi-Professional teams including the West Texas Drillers, Dallas Anarchy, West Texas Pride from 2009-2021. In 2012, was voted “offensive most improved.” In 2014, special teams MVP, and 2016, was named “comeback player of the year.” Also, was voted to the League’s All-Star games 3 times.

From 2017-2021 he became a part of the West Texas Pride and West Texas Oilers coaching staff. Coaching Wide Receivers, Offensive Line, and QBs. 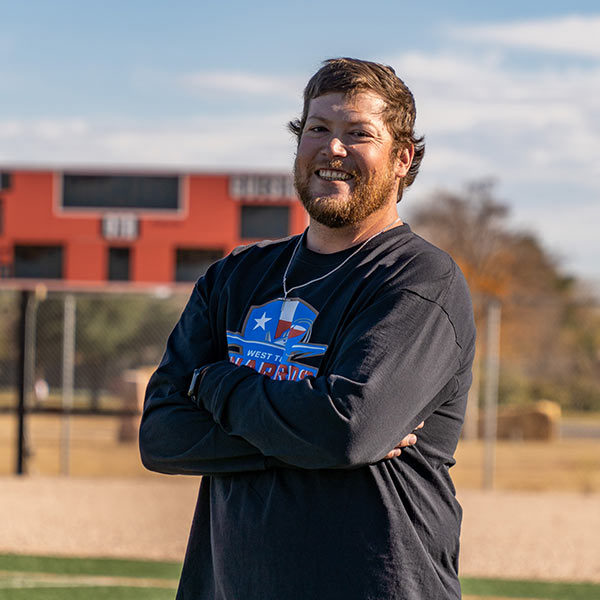 Coach Thrweatt is entering his first season as the Defensive Line coach for the Warbirds. Thrweatt a native to West Texas and a former 3X State Champion at Midland Lee and brings a wealth of knowledge to the Warbirds Defensive Line. After High School Thrweatt went to Texas Tech University where he played defensive line where his greatest achievements were winning the Most Improved Player at Texas Tech. Also, while playing football Thrweatt earned a Bachelor’s degree in Mass Communications from Texas Tech University.

Thrweatt went on to play professional football with stops along the way at Abilene Roughriders, Cen Tex Barracudas, and the West Texas Roughnecks. After playing he began his coaching career at Cisco College as the Defensive Tackles coach. Most recently was the Defensive Line coach for Midland Christian High School. Coach Thrweatt also was the former Head Football Coach for the West Texas Pride Football Team in which he lead the number one Defense in the league three different times. 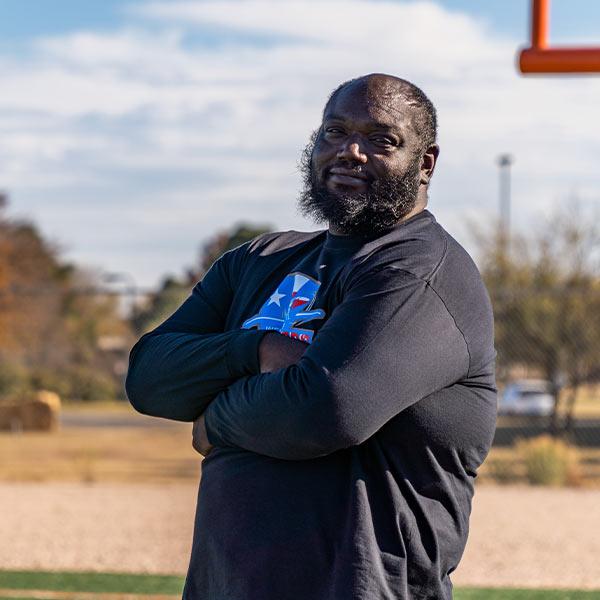 Coach Garcia is entering his second season with the West Texas Warbirds. Garcia will be taking over the Linebackers in 2022 after serving as the defensive back helping the Warbirds to an undefeated season and winning the Lone Star league Championship.

Coach Garcia started his indoor career coaching Full Backs / Linebackers for 10 seasons with the Odessa Roughnecks of the IFL. Appearing in the playoffs every season but one and won the IFL Championship after 3 seasons of the franchise. Garcia was awarded the #1 Linebacker core in the IFL for 3 seasons in a row. 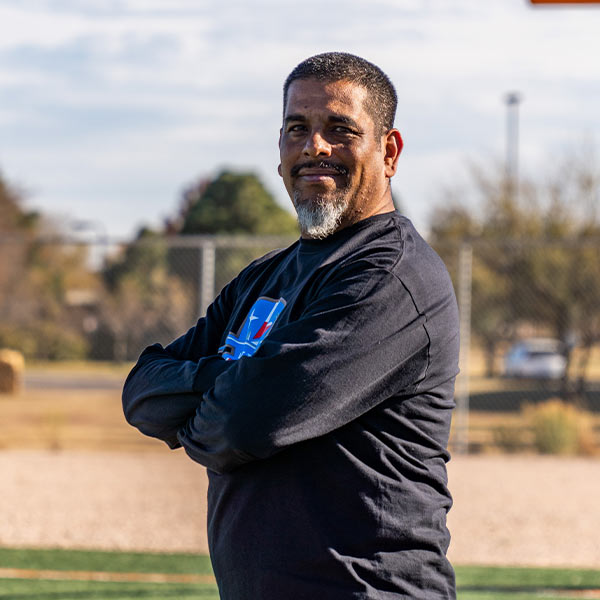 Coach Grizzell will be entering his first season as the Wide Receivers coach for the West Texas Warbirds. Grizzell spent three seasons as a player in semiprofessional football before deciding to cross the sideline as a coach. On top of coaching Grizzell is continuing his college education at the University of Texas Permian Basin to work on his Doctorate in Kinesiology. 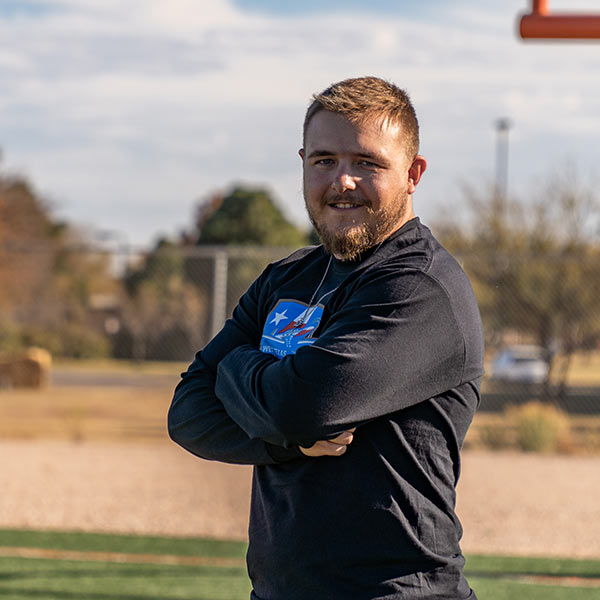 Raul Torres is entering his second season with the West Texas Warbirds as Director of Football Operations. He was raised right here in West Texas and went to Odessa Permian. Raul was part of the original indoor football team here in Odessa the West Texas Roughnecks and continued to be involved in the indoor game for many years. He works on the offense side of the football and helps current Head Coach Tate Smith. Raul has six kids Elijah (19), Daisy (16), D’Anthony (14), Antonio (14), Andrea (12), Elizabeth (4). Raul is extremely excited about coming back to the Warbirds Family on a quest for another Championship in the 2022 season. 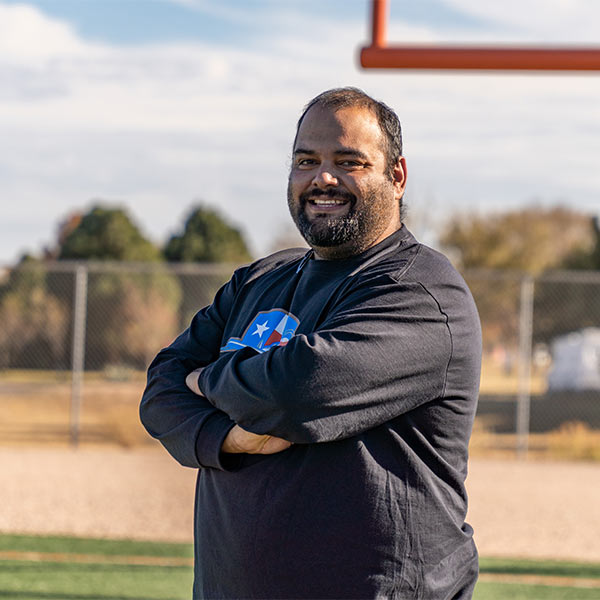 Big Joe is entering his 3rd year as an equipment manager for the Warbirds.  He played a big role in helping the warbirds win a championship in 2021.  Garcia has spent most of his time volunteering as a coach at the boys and girls club and YMCA. Garcia was born and raised in San Antonio where he attended Harlandale High School where he graduated in 1994.  He moved to West Texas in 2011 and now calls Odessa, Texas his home. 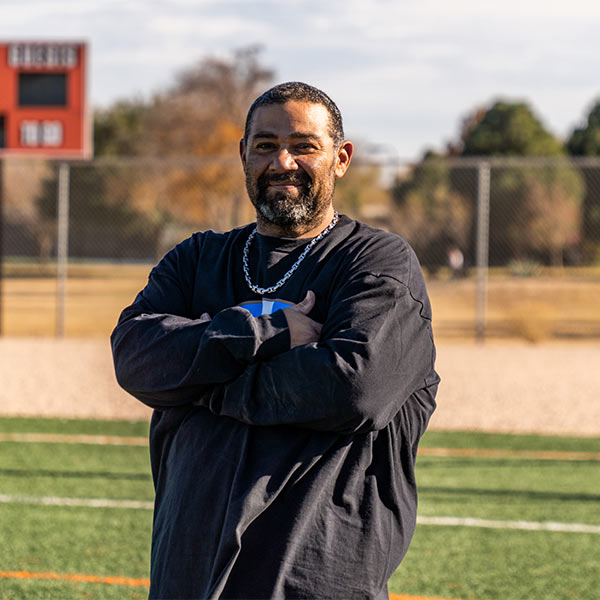 Chris is entering his 2nd year as an equipment manager for the Warbirds. Angley has been married to his wife for 30 years and has 3 amazing daughters. 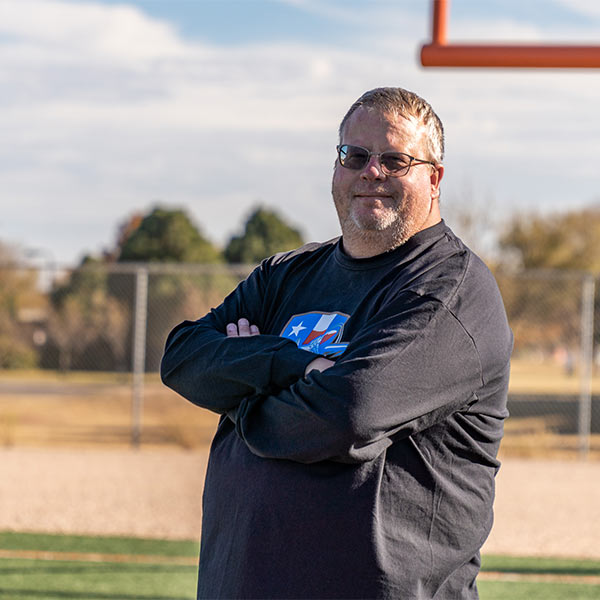